Click here to watch a virtual tour of the organ!

The first organ at St Peter’s Cathedral was built in 1876 by Bishop & Son and contained 29 stops over three manuals and pedals. This instrument was relocated in 1931 to St Augustine’s Church, Unley.

The present four-manual organ was built in England in 1929 by William Hill & Son and Norman & Beard. The 32ft Double Open Diapason pipes were made in Australia and to this day are the largest organ pipes in South Australia. Its unique Romantic musical character is further influenced by the excellent acoustics, unrivalled elsewhere in Adelaide. It was dedicated on Sunday 6th July 1930.

Originally built without any casework, the façade pipes were arranged in preparation for a case to be added. The organ stood unclothed for 34 years until the lower corniced section was donated in 1963 by its designer, Walter Bagot. A further 55 years passed before the section upwards of the pipe level was finally realised in 2018. The design of the new casework was achieved by working with the original 1929 Bagot sketch, utilising modern design tools and laser cutting technology to complete the intended design economically.

The 32ft Contra Trombone was installed by George Stephens in 1989 in memory of musicians associated with the cathedral. These full-length pipes are sited opposite the main organ chamber in the liturgical south transept where the first organ once resided. These pipes are not the largest pipes in the instrument, this title goes to the 32ft Double Open Diapason, whose pipes are big enough to climb inside and stand at the back of the main organ chamber.

In 2017 the organ was shipped back to England to the workshop of Harrison & Harrison Ltd of Durham, where it was comprehensively overhauled at a cost of $1.7m. Four new stops were provided and the 32ft Contra Trombone was revoiced; these tonal revisions being based on the original pipework scaling are perfectly in keeping with the 1929 tonal aesthetic.

While the romantic style and character of the 1929 instrument has been preciously safeguarded it has been equipped with modern playing aids to allow the cathedral musicians to have an instrument fit for today’s liturgical requirements. The instrument remains as one of the grandest and substantially musically unaltered organs in Australia, making it one of significant historic importance.

The organ was rededicated on Sunday 2nd December 2018. Click link to view the First Chords service.

St. Peter’s Cathedral – Policy for Use of the Cathedral Organ 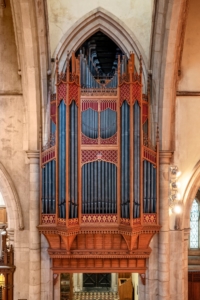 We are delighted to say that the full restoration of the Cathedral Organ was completed on time and under budget. The First Chords were played on Advent Sunday, 2 December 2018. By the end of 2018 the full cost of the restoration, $1.5 million, had been raised and paid. All credit to the fund-raisers, the Cathedral’s project managers and the superb work done by Harrison and Harrison Ltd, organ builders of Durham UK.

The restoration of the Organ, together with significant work done on the roofing above the organ loft, completes Phase 1 of the long term Conservation work of the Cathedral.